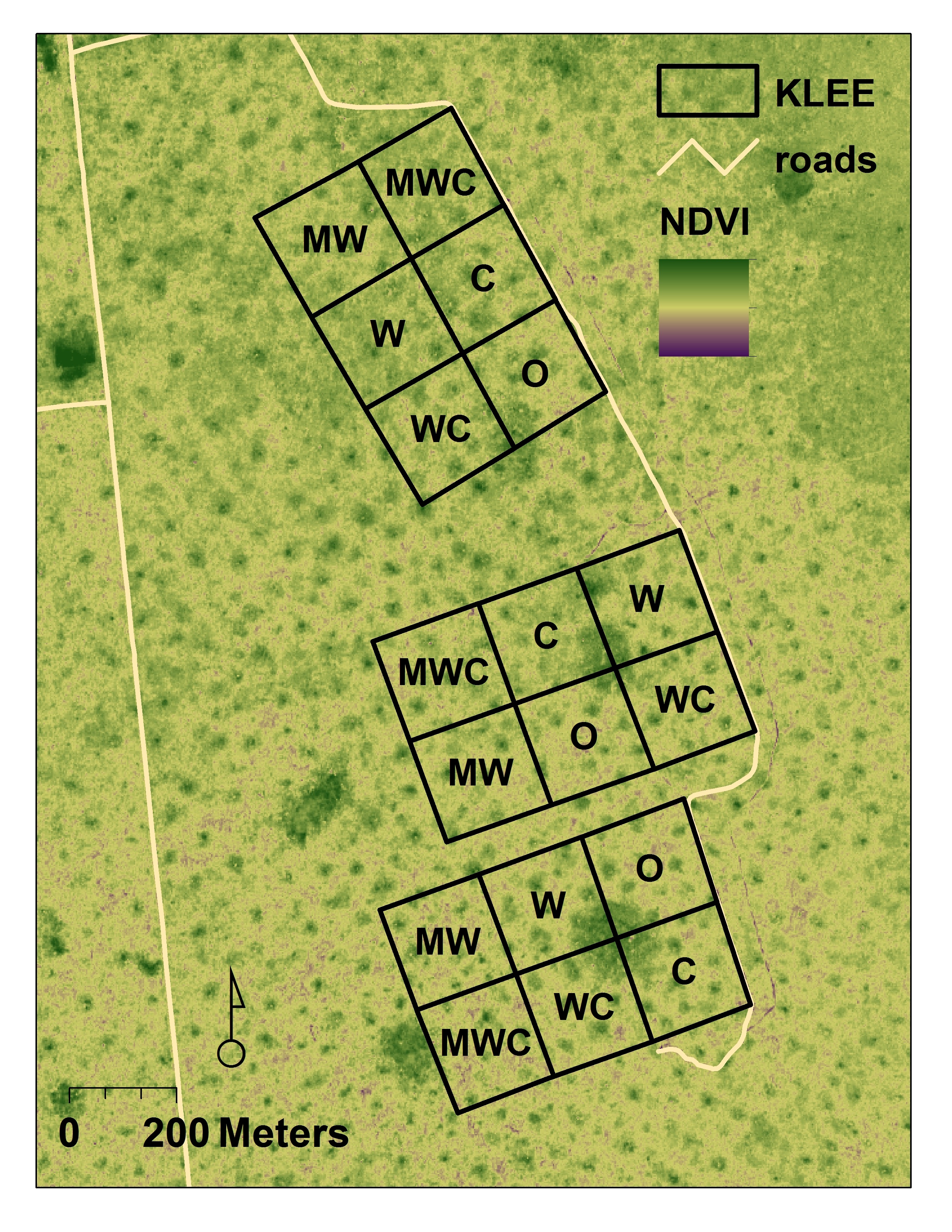 KLEE is a long-term, large-scale herbivore exclusion experiment in Laikipia, Kenya.  On arid and semi-arid range lands worldwide, large mammal diversity is in declines, and the centuries-old coexistence between livestock and native plant and animal biodiversity is threatened.  Much of this land suffers from size-specific wildlife loss and degradation caused by changes in land management.  Although there has been considerable research on the effects of individual wild and domestic herbivores on rangeland grassland ecosystems, there has been relatively little research on the separate and combined effects of different herbivore guilds on each other and on the vegetation they share.  As the value of biodiversity climbs, and the profitability of livestock production declines, we are seeking more innovative ways to manage, conserve, and restore these landscapes.  In 1995, we established 18 four-hectare exclosures that allow herbivory by six different combinations of cattle, wildlife, and mega-herbivores (elephants and giraffes).  This experiment can be thought of as representing a) different land-use strategies, and b) different extinction scenarios. We have added additional experimental layers since, including controlled burns, tree thinning, "over-grazing" treatments, and the effects of mobile cattle bomas (corrals). Our collaborative team is monitoring soil, plant, invertebrate, and vertebrate responses to these experimental treatments (see KLEE Publications). These exclosures also allow us to address fundamental issues in ecology, including compensation, competition, and facilitation among herbivores, and ecosystem stability and resilience in the face of multiple stressors. We are increasingly interested in the interactive effects on ecosystem resilience of multiple ecosystem drivers, including those associated with global change, which KLEE is uniquely able to address. KLEE has become the most productive field experiment ever carried out on the continent of Africa, with more than 140 peer-reviewed publications. 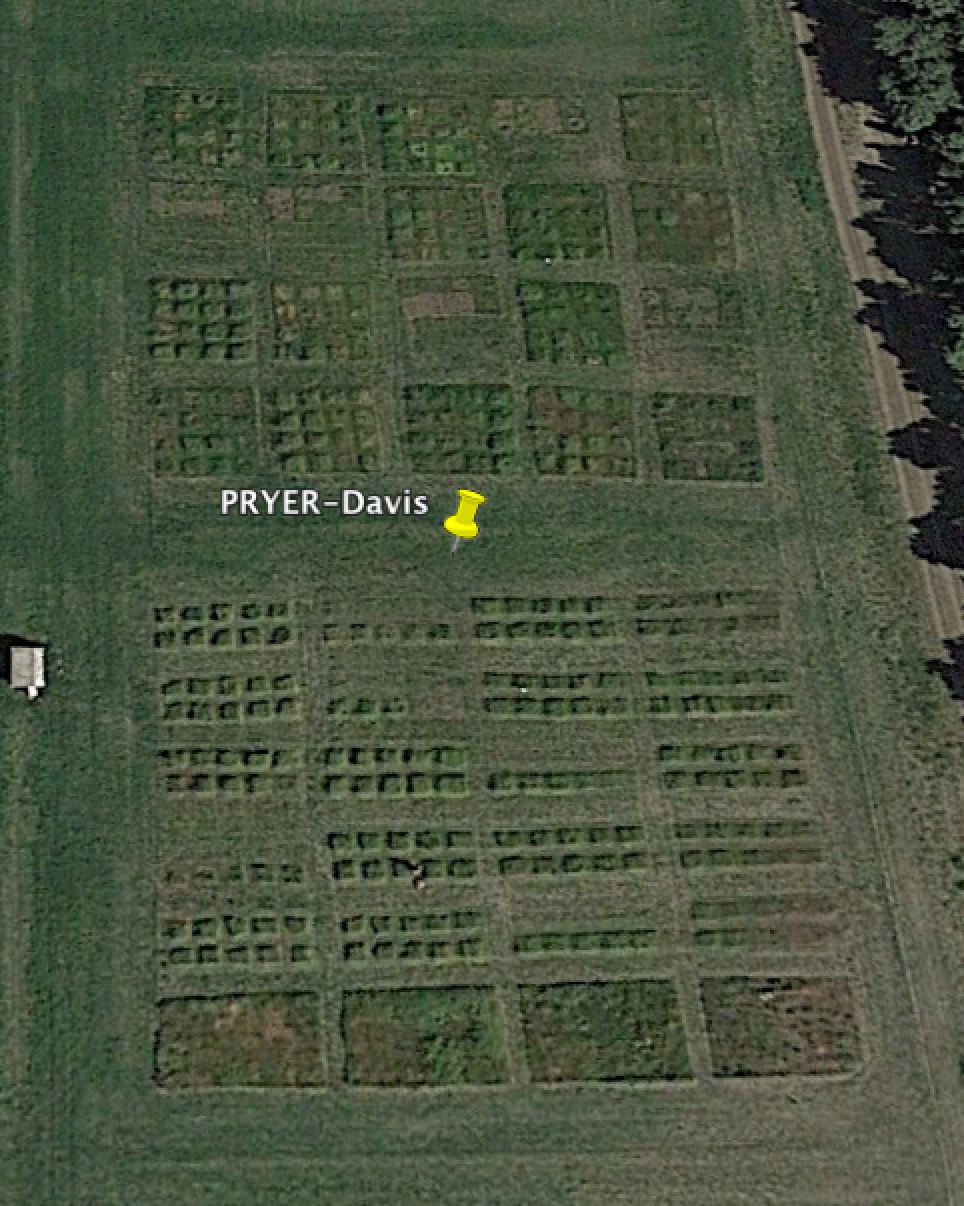 Two alternative but potentially complementary paradigms shed light on the conceptual basis of community ecology for ecological restoration. Succession theory suggests that ecological restoration is the task of assisting, reestablishing, or accelerating the natural process of succession toward a desired (climax) state. Some versions of assembly theory suggest that there may be multiple alternative ecological states that can be derived from a given species pool, making restoration efforts ambiguous and difficult. At the heart of these models is the idea of priority effects, in which chance variation in early arrival by different species changes the course of community development through preemption of space or other limiting resources. We are examining the strength of such priority effects and possible mechanisms to encourage or suppress them in restoration settings, often in the context of grassland communities. In particular, we are testing both temporal priority effects (planting less dominant species a year earlier than more dominant species) and spatial priority effects (planting in small-sale monocultures versus seed mixes). We are also examining a related form of contingency- year effects, in which year of establishment (or restoration) has profound effects on the trajectory of community development. We established these multiple priority experiments identically over five different years, and three different sites. In additional to documenting strong priority effects, we have shown that these experiments are profoundly affected by both year effects and site effects. See Restoration Publications).

Our lab has engaged in several projects designed to inform more effective ecological restoration, including:

The maintenance of biodiversity in a model system: Ant Coexistence and Competition in Africa (ACACIA)

With Todd Palmer (University of Florida), Maureen Stanton (UC Davis) and Dan Doak (University of Wyoming), we began a research project in 1998 that gets at the conceptual heart of biodiversity conservation.  One of the central questions in ecology is, “Why are there so many species?” The success of conservation and restoration projects is measured most fundamentally as species richness, and yet we still have only a rudimentary notion of what limits species diversity within and among communities. Our ability to restore and maintain biodiversity is limited by our understanding of how nature itself maintains species diversity. We are studying mechanisms of species co-existence in a system of acacias and their symbiotic ants uniquely suited to experimental, descriptive, and modeling approaches- the four ant species that inhabit Acacia drepanolobium of Laikipia, Kenya. This research has since expanded to descriptive and experimental examinations of the ecology and evolution of mutualisms in this system. See ACACIA Publications, and also this external summary.

The evolution of semelparity (and plant population biology)

Some of my more theoretical, early research was on life history evolution and plant population biology. In particular, I was interested in the evolution of semelparity– the life history characterized by a single, massive, fatal reproductive episode. Organisms exhibiting semelparity range from the spectacular (certain salmon, bamboos, cicadas) to the mundane (many invertebrates), and include all of our grain crops. Biologists have long pondered how evolution could favor death after first reproduction. A key clue is in the observation that semeplarous organisms produce more offspring (or seeds) in their single reproductive event than do closely related iteroparous species in any one of theirs. My past research on Mount Kenya Lobelias and more recent work with Peter Lescia on Arabis fecunda suggest that a simple mathematical model explains the demographic conditions under which this increase in reproductive output more than compensates for the loss of potential future reproduction. I continue to dabble at the edges of these questions (see Life History Publications).